The Role of Social Media in the Brexit Decision 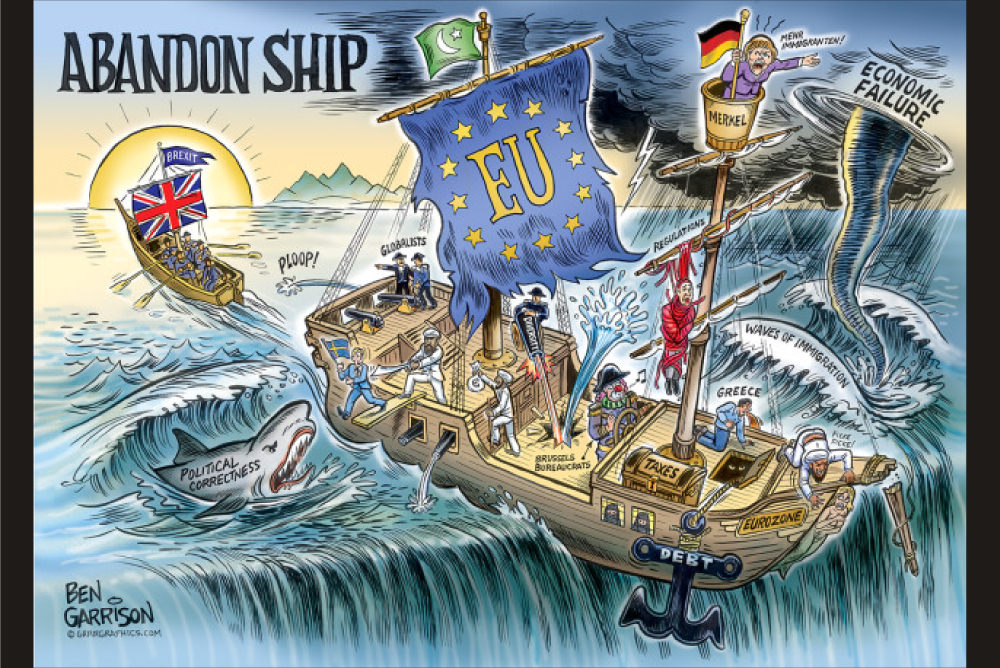 In a landmark decision this past Thursday the British populace voted to exit the European Union, leaving both the United Kingdom and the world in turmoil and disbelief. In the weeks leading up to the vote, the contrasting opinions on the issue were clear, but many were skeptical that Britain would actually decide to leave the EU. However, the days that preceded the referendum were filled with uncertainty and many expressed their anxiety on social media platforms. Below is a screenshot from Snaptrends, which displays an accurate depiction of the conflicting viewpoints and the apprehension surrounding the situation. 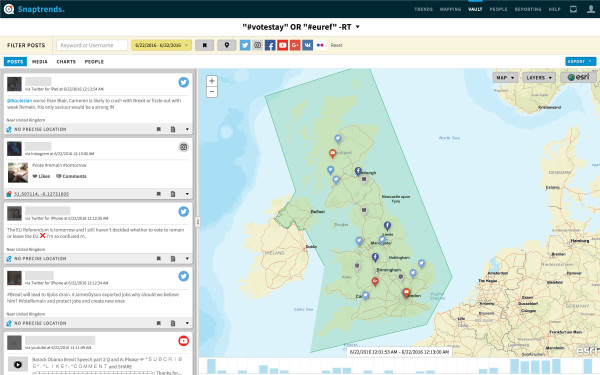 Because our main focus was to monitor posts from the UK, by using our geofence tool we were able to isolate posts from that region alone. Additionally, though, we monitored posts throughout the EU and the entire world by using keywords in our search such as “brexit OR referendum OR “european union” OR “#brexit” OR “#voteleave” OR “#voteremain”.

The number of votes to remain or leave reveal how close the vote actually was, with 17,410,742 voting to remain (51.9%) and 16,141,241 voting to leave (48.1%). But beyond the numbers, the resulting narrative of the historic Brexit vote wasn’t so black and white. Using our high-powered technology, we were able to understand how voters felt pertaining to this issue during the week before the vote, on the day of, and after the decision had been made. Not only were we able to collect meaningful posts from individuals, but using our advanced data tools, we were able to tell a story of what actually happened.

Applying our Sentiment tool, which allows the user to monitor whether the posts were generally positive or negative over a selected period of time, we tracked the Brexit decision. As is shown in the screenshot below, in the week leading up to the referendum, the public had mixed feelings on the issue, but the posts were primarily positive.

However, we took another screenshot of our sentiment tool but adjusted the time period to reflect the day of the vote and the day after.

As the British people learned that they would no longer be a member of the EU, it became very clear that the social media reaction was pessimistic.

Undoubtedly, younger generations use social media more often than the rest and our Sentiment tool helped reveal in real-time that millennials were distraught over the decision. Our Word Bubble tool also led us to the same conclusion. Below is a screenshot of the most used words on social media throughout the Brexit referendum. 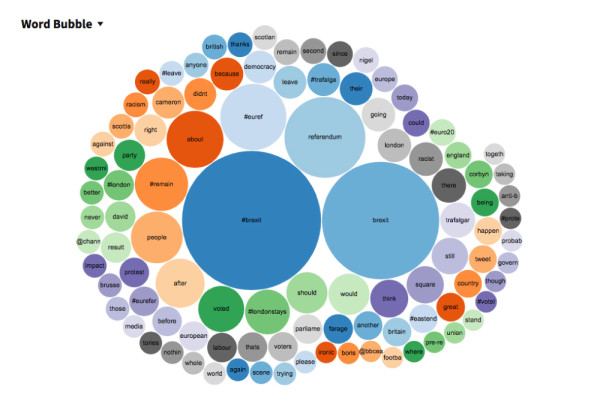 As is shown, the orange “remain” bubble is much larger than the light blue “leave” bubble. Furthermore, as voter statistics were published, our insights matched the data, as an overwhelming majority of youth voted to remain, while the older generations opted to leave.

Another interesting note is that even though social media users were quick to voice their discontent, a smaller proportion of young voters actually participated in the referendum. While citizens of the UK will be quick to point fingers, the world will watch and wait, not knowing what the consequences will be or when they will fully take effect. However, what we do know is that this decision will impact the future of not only the United Kingdom and the European Union but countries throughout the world.

For further information and graphics on Brexit visit the links below: